Some readers may remember a recent post about people and their relationship with science. In particular I ran a poll on Twitter,  asking about “gateway drugs”. What got people initially fired up about about science? A small cross section of followers responded: 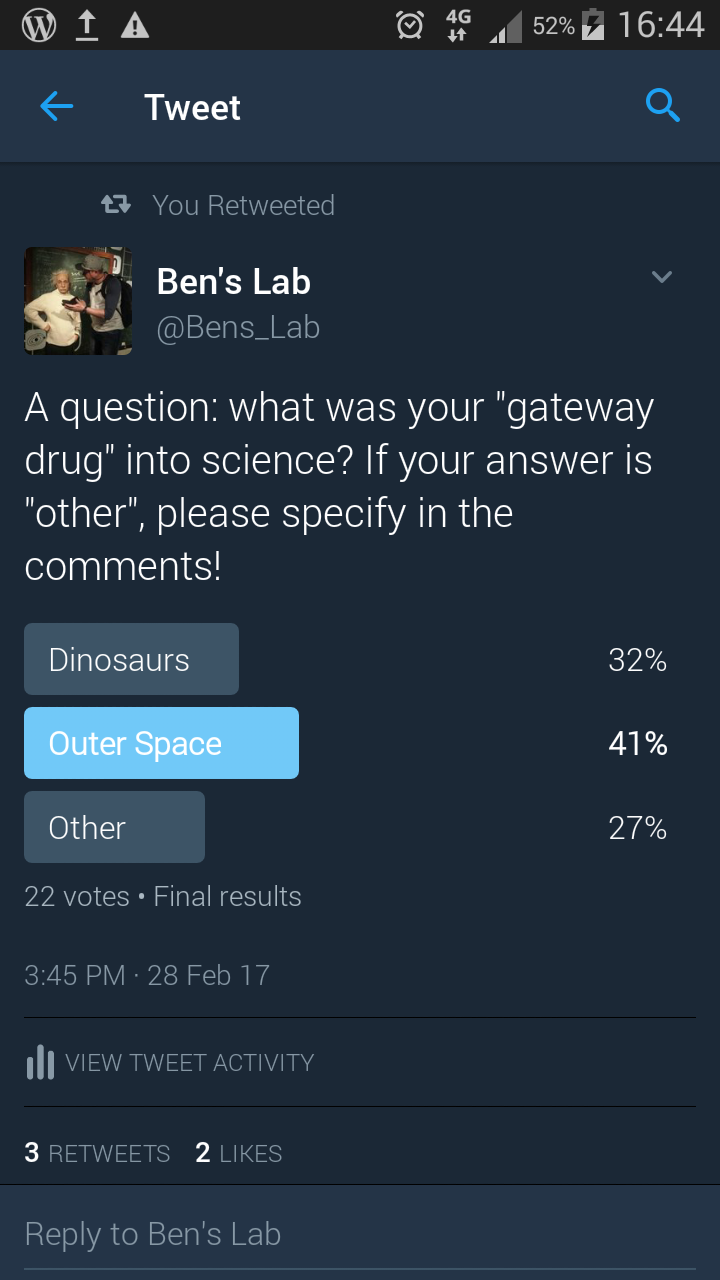 For insights into these “gateway drugs” check out this post.

This post will take us on a joyful (and maybe self indulgent) look at my own gateway drug: dinosaurs. A very recent visit to the Melbourne Museum had me making a bee line for the dinosaur and fossil exhibits. Even now, in my forties these fascinating relics of the bygone age to top all bygone ages have a powerful hold over me.

Part of this hold is their ability to grip our imaginations. “Jurassic Park” was for me a life changing event. I still recall the hushed awe I felt when I saw that Brachiosaurus for the first time. Up until then I had only imagined myself walking the steppes and plains of Mesozoic earth; either walking alongside these creatures or watching them fight, struggle, roar and sink into mud. I was with the dinosaurs in a very real sense. When I read books about them or saw pictures of them it was like I was there…

“It’s a warm afternoon, somewhere in mid Cretaceous Queensland, Australia. A small group of hadrosaurids are approaching a shallow river with caution. For miles in all directions a tangled patchwork of marshland and conifer forest is home to communities of dinosaurs who have made this delta their home for countless generations. This is a group of Muttaburrasaurus,  and they bleat and honk quietly,  instinctively hushed.

Small waves lap at their feet as they wade out into the river and begin drinking. The Sun has a sharp edge to it and the creatures are lapping noisily, drinking their fill. Clouds of flies harass them.
The group has been cautious around this waterway lately for a reason.

By the time the group is fleeing the water, braying loudly in a tone of animal panic it’s too late for one of them. A younger individual is flailing, now kicking weakly in the water and sending shock waves up and downstream that will bring curious scavengers like sharks along. As the juvenile dinosaur is pulled beneath the water it sees another member of it’s herd;  watching from the bank of the river.

A kronosaurus has taken of late to patrolling the river, recognising the easy pickings to be had. Herds of dinosaurs like these muttaburrasaurus are an irresistable draw. It’s latest victim is dead in less than three minutes; as it’s blood supply gushes away, mingling with the river…

See? It’s like a perfect fantasy world. Perfect because it actually existed!

The Dinosaur walk exhibit at the Melbourne Museum allows one to feel this wonder again.

It’s school holidays as I write here in Australia. The skeletons are surrounded by throngs of kids (and equally excited parents I would dare say). Could there be some budding scientists in that mix somewhere? Maybe one day a future palaeontologist or biologist will recall this day, remembering how the Tarbosaurus skeleton loomed large, glowering down at them. They might recall a mixture of excitement and wonder that will stay with them their whole lives. 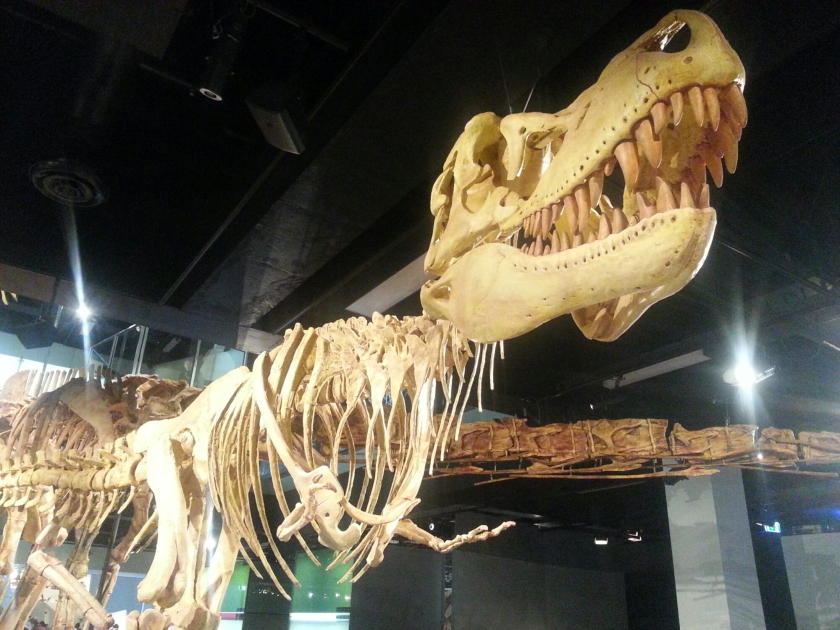 An adolescent Tarbosaurus, smaller cousin to the infamous Tyrranosaurus Rex.

I’m surrounded by screens. Phones are out, tablets are pointed at the displays and the museum has touchscreens everywhere, where kids are jostling to interact with the information being presented on them.

As seems to be a standard thing these days the children are focusing more on this electronica. I note this and tell myself what my younger self would have seen when looking up at these giants….

A cool wind slides across a vast expanse of sandy bushland, somewhere in what will one day be Mongolia. The time: not really important to the young Tarbosaurus creeping along a dried river bed,  eyeing new prey. For the human observers, borne by imagination into this distant past let’s call it approximately 68 million years before palaeontology is even invented.

Food is a little scarce out here for the tyrannosaurid.  Larger Tarbosaurs in the region have staked their claims, carving out large tracts of territory. The young dinosaur isn’t starving though. It has discovered these small herds of sheep sized creatures; protoceratops. These are, as their name suggests, ancestors to the tank-like horned dinosaurs of the late Cretaceous: Triceratops,  Styraccosaurus and the like.  The diminutive reptiles are abundant here, staying in groups where there is safety in numbers. They’re savage little fighters too. Seeping wounds on the Tarbosaur’s lower legs and belly give testament to this. They have discovered strength in numbers.

Until they need to lay their eggs. Using the slope of a shallow dune as cover the Tarbosaurus is following the strong scent of a lone female. She’s busy laying her eggs in a neat ring around the edge of a shallow depression she’s dug. She is too focused on her labours, and is unable to defend herself as a giant three toed foot crushes several eggs and powerful jaws lock around her neck. Dagger like teeth finish her quickly, before she can even bleat in pain… 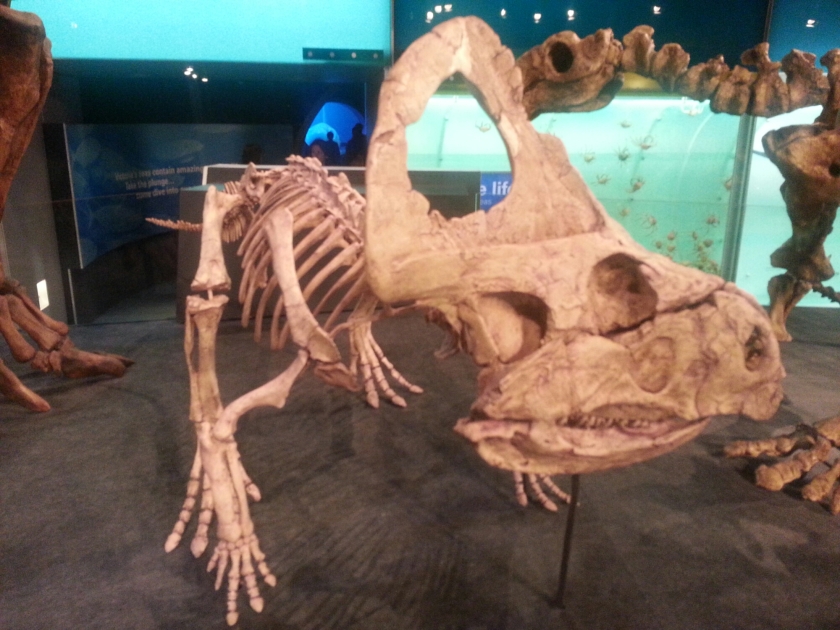 It all happened so fast..

Who knows what has brought these bones all the way across the world to this museum? The lives of these creatures is impossible not to wonder about as I find more skeletons.

Not all dinosaurs here hail from overseas. Australian dinosaurs take pride of place.

Qantassaurus intrepidus was a small bipedal hypsilophodontid which hailed from what is now-again- modern day Queensland. Along with Dinosaur Cove in Victoria Queensland is becoming a veritable hot bed of fossil discoveries. Qantassaurus is interesting in the context of this exhibit because it’s appearance has been almost entirely reconstructed from fragmentary fossilised teeth.

This alone speaks volumes of the importance of imagination to a scientist, and to the detective work they perform as a matter of their work…

It’s morning in Jurassic Queensland. A pair of rabbit sized mammals are squealing noisily, squabbling over the remains of a dog sized reptile . There isn’t much left. Other scavengers have long since picked the carcass to pieces. The combatants snarl and wrestle over a tooth, desperate to claim any prize in this battle. A victor emerges, and the loser scuttles off into surrounding undergrowth,  eager to not become prey itself….

A few teeth! From a few teeth (and several educated guesses) palaeontologists are able to glean information: the animal’s lifestyle, diet, and size.

Walking around the exhibit, visitors find themselves hopping backward and forward through time…

Australia, one million years ago, sometime during the Pleistocene Period. Vast red emptiness spans the continental interior. This is a dry, desert continent and life here is tough. A lone predator stalks the deserts and arid grasslands, preying on the megafauna that has evolved here in isolation from the rest of the world.

A lizard, looking something like a seven metre long Komodo Dragon stalks the scrappy salt bush that stretches as far as the eye can in all directions. Some day a new predator will arrive here; a bizarre two legged beast that will conquer these lands and seize their place at the top of the food chain.

For now, the harsh sun blisters the land but Megalania hides in shadows, eyeing it’s next victim…A pair of Diprotodon grazes on some nearby bushes. They are too intent on their meal. These giant marsupials are the ancient Australian equivalent of the rhinoceros,  filling the same ecological niche.

Diprotodon, along with all other Australian megafauna died out circa 46000 years ago; a victim of climate change and human predation.

The Diprotodon aren’t fast movers at the best of times, relying mainly on their size as a means of warding off predators. The youngster, however, is brought down quickly as the ancient reptile dashes out with a freakish burst of speed. The mother is equipped with a fearsome pair of incisors. Normally she uses it to extract roots and vegetation from the dry red soil.

Megalania is rewarded with a broken foot as it is trampled by an enraged mother weighing several tonnes. Those teeth inflict a bloody toll as well,  and the defeated predator is forced to retreat,  slinking quickly back into the scrub….

Honestly, having just come back from a trip to outback Australia, surrounded by some of the oldest mountains in the world

For 380 million years the vast slab like Grampians have dominated the Victorian landscape.

I can almost smell these long lost landscapes. I can stand on the cusp of a red dune, watching whirly-whirlies (dust devils) skipping across the endlessness of an inland sand sea. Where I stand in this dream scape was once the floor of an ocean: the Eromanga Sea. Imagine looking up from this spot, protected by the vast lengths of time between yourself and seeing elasmosaurs; graceful long necked giants gliding through the waters.
There are more posts to come on the very ancient world, and Australia in particular. I would love to hear other people’s dinosaur tales. I don’t think a half baked youtube video can do justice to these prehistoric beasts and their memory as much as the written word. Anyone can feel free to offer suggestions or their own experience growing up in the imaginary shadow of dinosaurs and the prehistoric world.

The Universe in Plain Human

The Universe in Plain Human

Blurring the lines between poetry and prose

Restraining Government in America and Around the World

An Unwavering Love of Comics

Articles on science, philosophy and beyond

Why Evolution Is True
thaithuongtriet

The law of radiations disposition

Grand Strategy: The View from Oregon

Grand strategy and geopolitics from the perspective of the Pacific Northwest

Science fiction and other stuff

Where art, delicious food, and world travel are incorporated into the home with a feminine twist!

Astronomy, space and space travel for the non scientist

A blog authored by the natural history illustrator Beth Windle.

Exploring the archaeology in (and of) video games.

Its all about Cooking ...

A blog full of humorous and poignant observations.

snapping up tasty tidbits of science

POETRY FROM THE LAB

Myths of the Mirror

History with its flickering lamp stumbles along the trail of the past...

A space enthusiast, engineer and a curious homo sapient. Yeah, that’s pretty much it.

Archaeology -- Bioarchaeology -- School -- The good, bad, and the ugly about life in the trenches and life as a student

Museums of People // Libraries of the Dead

a woman trying to make sense of science

A new perspective on an old question.

There's Something About Science

Micro Girl in a Micro World

The Diary Of A Muslim Girl

On a mission to captivate the world with physics, one particle at a time.

Tales of humour, whimsy and courgettes

Dopamines
In My Stride

Taking Everything as it Comes

An Island In the Sea of Mystery